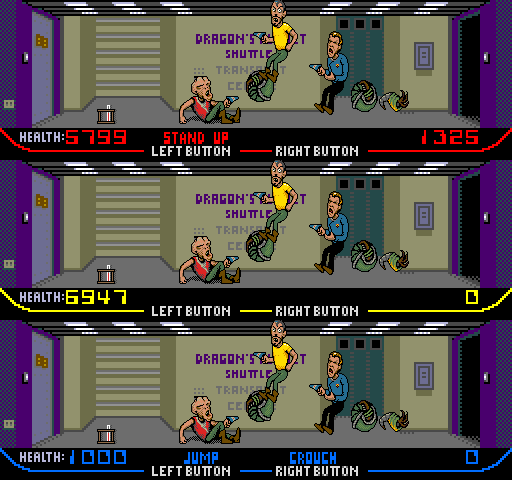 Xenophobe is a 1987 arcade game developed and published by Bally Midway. Starbases, moons, ships, and space cities are infested with aliens, and the players have to kill the aliens before each is completely overrun. The screen is split into three horizontally-scrolling windows, one for each of up to three players, yet all players are in the same game world.

The goal of each level is to defeat all the aliens before time runs out. Some rooms routinely display the percentage of alien infection and time remaining until self-destruct when the level ends (but a nearby button can temporarily deactivate the count-down). Levels may contain more than one floor, and players use elevators (and sometimes holes in the floor) to move between floors to defeat all of the aliens. Players can also pick up more powerful weapons and other items to help in their eradication of the aliens.

The hostile aliens (known as "Xenos") come in different forms. There are "Eggs" (similar to the eggs in Alien). If an Egg hatches, it creates a "Critter" which can attach itself to the player and drain health. If a Critter is not killed, it eventually matures into a "Roller" (a cross between a lizard, caterpillar, and armadillo). Rollers are one of the tougher enemies, as they can ball themselves up and roll around while impervious to the players' guns. Rollers sometimes grow into the "Warrior" Xeno form, which attacks by leaping and requires multiple hits to kill from most weapons. Warriors are able to spit damaging acid across rooms (and sometimes into adjacent rooms). This acid also drips from the ceiling in some rooms. They also have a devastating leap attack that will knock down and disarm. One of the more insidious attacks in a Warrior's arsenal is its ability to disarm a player. Simply walking past a Warrior can cause the player's gun to drop to the floor (destroying it if still in a doorway). Other Xenos include "Tentacles" that randomly appear from the deck or ceiling, and trap or strangle the player respectively, and the arguably toughest enemy is a Xeno "Queen" which appears either in doorways or behind certain backgrounds and throws proto-eggs at the players and shoots hypnotic eye beams which trap players and drain their health. If the proto-egg lands on a screen with a player, it grows into another Egg, which eventually hatches into a Critter as usual. Any biological kinship between Warrior Xenos and Queen Xenos, and whether the Tentacles growing in the ducting are part of the Queen Xenos, is merely implied. There are much larger alien carcasses the player can walk past or through but they only appear as part of the background.

The weapons a player collects are fairly diverse. In order of damage, the weapons are: punch (unarmed), phazer (the starting weapon), laser pistol, lightning rifle, gas gun, and grenades. The guns tend to trade power for range. The one exception to this is the phaser, which has medium range and very low damage. Great care has to be taken with the grenades, as they bounce off walls and doors and can hit the player who threw it, or even other players. None of the guns can hurt other players, but punching can, and makes the punched player fall down, and drop the gun he was carrying, which the attacker is then free to pick up. Whenever a player's gun is lost and destroyed (such as by dropping it in a doorway), a small robot wheels into his room and dispenses a random gun for him to use. The laser pistol lends itself to a conservative play style, keeping opponents at range and moving through levels slowly (often crouched) while the gas gun encourages faster moving play since the player must close quickly to eliminate foes.

As players go through the various maps (Rocket Ship, Moon Base, Space City, etc.), they encounter various items to be picked up. Some (human skulls, lab vials, fire extinguishers, etc.) are only for bonus points at the end of the level. Others (grenades, knives, food) are immediately useful to the players (grenades for throwing, will inflict instant death on Xenos and damage on a player; a knife will cut a player free of Tentacles, killing them in the process; and food replenishes the players' health). Still other items (disks, tools, ID tags, codes, etc.) are useful in the right room. For example, the tools fix the always-malfunctioning grenade dispenser (which constantly throws out live grenades), the disk allows a player to use a teleportation device, the ID tag will deactivate security obstacles and the code enables a player to set a self-destruct sequence to destroy a base instead of letting the Xenos take it over. In this case, the players receive a reduced reward compared with a victory, but if the Xenos take over, there is no reward. Items collected are counted, and bonus points awarded for each collected. Grenades carry over from level to level.

Each credit gives the player a certain amount of health, which counts down even without combat. Food and some rooms replenish a player's health. The game cycles through levels, increasing the difficulty each cycle, until all players died and no-one continued. It is entirely possible to do well enough to continue playing without adding more credits.

This game was unusual in that it split the single monitor into three separate horizontal sections, one for each player. This allows the players to cooperate, but also allows the separate players to wander around freely, a feature not found on most cooperative multiplayer games. With most games that allowed multiple players at once, all players were bound by the edges of the screen (that is, all the players had to be in the same general area on the screen, so it could contain them all). Because the game features such high resolution for its time, the split screen did not detract from the game's graphic appeal.

Xenos. The very name strikes fear into every colonist's heart. A distress call is received from space stations orbiting your homeworld, then silence. A single ship escapes, piloted by a battered man who tells the tale of pods that hatch into acid-spitting Xenos. A small band of engineers has been dispatched to combat the Xeno threat before it takes over all the space stations and, eventually, your homeworld.

Xenophobe is a side-scrolling shooter with platform elements. Assemble your band of engineers and fight the Xenos on each station, striving to either clear it or abandon it. You start out with a standard issue laser, but can pick up additional weapons as you find them, including Phasers, Lightning Rifles, Poofer guns, and bombs.